What differences did you spot? What’s also changed since the photos were taken?

Click on the buttons to read what Chris has to say …

The rood beam and associated figures were erected in 1923 as a First World War memorial.

The altar has changed, the newer one was given in April 1922.  The carved angels on either side of the altar were given in 1933.

Although the painting of the Madonna and Child behind the altar in the later photo is not there in the earlier photo, it was first presented to the Church in 1912.

The stained glass window behind the altar has changed, the earlier one dates from the 1870s, the replacement from 1939.

The oil lamp in the ceiling has gone, replaced by electric lights which were first switched on when the Bishop of Crediton dedicated the restored Lady Chapel and a new vestry on 29 December 1930.

Note the partly visible stove in the earlier photo in the right foreground; it had probably been removed before the later photo was taken.

The lectern appears on the right of the earlier photo, and on the left in the later photo.  It was given in 1916 during the First World War in memory of Major Richard Carnegy, one of four Belstone men to give their lives in that conflict.  The British Legion flags, on the wall behind the lectern and pulpit, date from just after the First World War.

The Mothers’ Union banner (‘S Mary’s MU Belstone’) was made by Mrs Farmer and dedicated by the Lord Bishop of Exeter on 17 July 1934.

The King’s Messengers banner on the other side of the altar (with the large cross on it) was dedicated on 29 May 1932.

The pulpit is the same in both photos – it was given by Miss Dora James in 1913.

Now take a look at the more recent colour photo of the church interior, taken by John Moppett in 2006; the main differences are the oak pews, which replaced the chairs in 1960, the absence of the King’s Messenger banner, which is now at the back of the church near the vestry door, and changes around the altar.

The Centre of the Village

Can you also put the pictures in date order?

The Centre of the Village

Gee’s Series No 606 must date from before 1911 as it doesn’t include the stone erected for the Coronation of King George V on 22 June of that year.  Dartmoor House took the place of three thatched cottages when it was built in 1896.  Note the large slab of granite on the left hand edge of the image – this is being worked at William Brock’s stone yard, which is just out of sight to the left.  This stone yard closed when Mr Brock died in 1913.  Keep your eye on the single storey barn with the two large doors to the left of the formal group – subsequent photos in this series show how it changes.

Postcard 15303 cannot be later than 1923 as that is the postmark date on the reverse.  The Coronation Stone is now in the right foreground of course.  The single storey barn has been converted; during the First World War it was a butchers shop, then between 1920 and 1928 it was the village Post Office.  Now keep your eye on the white barn at the top of the hill on the right of the photo …

Postcard 98876 shows the white barn converted to the house Town Living Cottage.  This conversion was done in the mid 1920s which was also the time that the telephone poles were erected.

Finally in this sequence is the post-Second World War postcard 25697.  Here you can see the one and only village lamp-post; this was erected in 1944.  The telephone poles have been replaced by ones also carrying electricity lines (mains electricity came to the village in 1934).  The one new building is the rectangular garage behind the lamp-post; Mr Chastey erected this in the mid 1930s to store his two taxis.

What dates do you estimate for the three views? 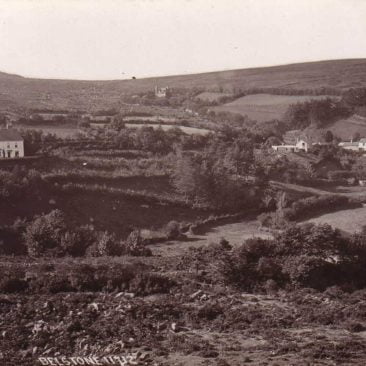 Postcard 5924 shows just three houses; centre left is Moorlands House, built by William Pike in 1891; back right is Resugga built in 1901 for Lt Col Hutchison at a cost of £651; and front right is the much older Birchy Lake Cottage.

Three new buildings have been built by the time of postcard 11712; on the far left is the single house Moorlands North and Moorlands South,        built in the early 1900s; to the left of Birchy Lake Cottage is Pixies Hut, also built in the early 1900s; and to the right of Birchy Lake Cottage is Resugga Lodge, built for £185 in 1911.  On the top right note a small quarry just below the skyline of Watchet Hill – you won’t find this today as it was filled in with spoil from the North Devon Water Board’s excavations for the underground reservoir at Watchet in the early 1960s.

The trees have grown a lot by the time of postcard 22293, which is postmarked 1951.  The one new house is Taikoo with its associated outbuildings (centre right), which was built in 1924.

Elsewhere on the Site …