Nick Atkinson writing in The Beacon (November 2012) writes: ‘Perhaps surprisingly, the only area of true Ancient Semi-natural Woodland, that is land that historically has been under continuous tree cover since the year dot, in the whole of South Tawton parish is Skaigh Woods immediately to the south of Sticklepath. These mixed oak, ash, rowan and hazel woodlands cover only about 10 acres of ground above and beside the River Taw. We owe much for their continuing existence to the people of Belstone who clubbed together in 1956 and raised £600 to purchase 77 acres of Skaigh Warren, which included these woodlands, in order to save the area from coniferous afforestation. Ancient Semi-natural Woodland is of immense importance for all sorts of wildlife and for the wonderful atmosphere created by the wealth of ferns, mosses and lichens growing on every bole and branch.’

In about 1870 Skaigh Wood became part of the Rockside (now Skaigh House) estate when William Weldon Symington, who had made his fortune in Market Harborough with Symington’s Soup (and whose famly also owned another factory in the town making corsets, including ‘The Liberty Bodice’), built the house and took over the 88 acres of mixed woodland and Skaigh Warren.

He built bridges over the river, laid out the riverside path and lined it with rhododendrons , and constructed four summerhouses and a ‘fountain’ (the pond and feed pipe associated with this fountain were restored in 2012).  On the slopes of the Warren a ‘hunting lodge’ with glass windows, whose remains, including a fireplace, can still be seen, was built close above the ‘Pheasantry’ marked on contemporary maps.By 1902, the property had passed to solicitor Thomas Henry Ormston Pease.  Auction particulars from 1909 and 1913 describe ‘rabbit and woodcock shooting’ in the Warren and ‘fine trout fishing’.  Skaigh Wood bridge – on the site of the current ‘Tarka’ bridge built in 1998 – was private and kept locked, only for use by Rockside’s guests.  In 1913 Mr Pease was paying 1/- a year to the Lord of the Manor (S P B Newcombe) for this bridge crossing to Common land, and for another bridge – long gone – 600 metres downstream.  By 1948 it had become dangerous so a public subscription raised over £33 towards the cost of renewal. Work was carried out by Bert Woods of South Zeal, but by the 1960’s it had gone.  A replacement bridge, built over 12 days in 1970 by 124 Squadron Royal Engineers used £36 12/- worth of timber and included gates to prevent animals crossing. Cyril Robinson, a past Chairman of the Parish Council, performed the official opening and planted a chestnut tree nearby.

In the early days it is believed that an aerial ropeway ran from the house to the river, taking picnic hampers down to the guests and bringing firewood back up to the house.  The trees along the river would be lit by fairy lights in the summer.  Three Douglas firs were planted in the wood, just below the weir, to mark Queen Victoria’s Diamond Jubilee in 1897; two of these remain today.  One of them was probably the ‘well-known Skaigh eyrie’ of local ravens in the 1930s who nested there ‘thanks mainly to the zealous protection of Mr Pease, the owner of the wood’ (Dartmoor in all its Moods, Douglas St Leger-Gordon, 1931).  John Bowden ofSkaigh View remembers coveting the nest and eggs, but was put off by the barbed wire around the base of the tree.  Other trees planted then and still standing as fine mature specimens among the natural woodland include a single Wellingtonia and Lawson Cypress, and several larches.

The woods have always been a haven for wildlife.  In about 1958 a long-eared owl was found nesting here, which is believed to be the only known nesting attempt on Dartmoor; throughout the 1980s pied flycatchers were regularly seen; in Under Dartmoor Hills (1954), Leger-Gordon describes how red squirrels had recently returned to the lane that leads into the wood from Sticklepath; in 1989 I saw a crested tit in the trees on two occasions, and the flash of kingfishers along the river in 1975 and 1987; occasional remains of chewed salmon point to the presence of otters.  In 2012 the wood was part of an RSPB survey into declining numbers of wood warblers.

By the 1950s Charles and Margery Smardon were running Skaigh House as a hotel and had sold the wood.  Local people became aware that the new owners were intending to clear fell the long established oaks and mountain ashes, to replace them with serried ranks of young conifers.  It was this disturbing prospect that inspired many Belstonians to contribute to an appeal for the £600 required to purchase 77 acres of the wood and warren, a sale which was successfully completed in 1956. 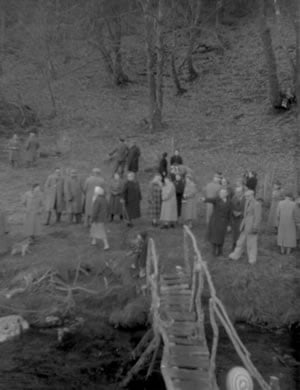 Soon after the first tree planting took place, with a temporary bridge erected across the Taw above Skaigh View.  Village elders and appeal subscribers including Colonel Harry Baker and Cyril Robinson planted trees, as did William Ellis who arrived in his familiar AA uniform.  Kevin Woodward and Robert Littlejohns, both about two years old at the time and the youngest people present, were invited to do their own planting.

In 1957 Lloyds Bank took over the Trusteeship on behalf of the villagers and retained it until 1993, when Belstone Parish Council assumed responsibility.  Don’t think however that the wood is owned by the Parish Council.  It is the Belstone parishioners collectively who own it; thus it is a true community wood and we should all have an interest in its well-being.  In the years since 1956 new plantings have been made by, among others, the ‘Men of the Trees’ (1972), South Tawton School (1986) and Sticklepath & Okehampton Conservation Group.  In 1980 small areas were fenced off temporarily to study natural regeneration free of grazing pressure.

The wood, being north facing, has always been relatively sheltered; however, after storms in 1978 Belstone Youth Club agreed to clear the riverside footpath and other clear up operations were undertaken by the DNPA after gales in 1986 and 1990.  The present DNP management plan emphasises conservation, regeneration and the creation of new wildlife habitats, and with this in mind a major scheme was undertaken on the first weekend of December 2000 when the DNPA co-ordinated the planting of around 1400 new trees by sixty people in a 1.6 hectare (four acre) site above the existing wood.

Mostly oaks and birches, with fewer hazel, ash, rowan, hawthorn and crab apple, they were planted across half the site, leaving a central glade and an area between the old and new woods where natural regeneration could occur.  Nan Jenkins, the widow of author Alan Jenkins who was one of the parishioners instrumental in the original purchase, was one of the visitors to the site.  A decade on most of the new trees are well established.

Other management recent work in the wood included: a five-year project from 2005 to poison and remove extensive areas of the invasive rhododendron ponticum which has revealed views of the River Taw not seen for decades; and the construction of a new weir with an underwater access passage for fish on the river at Cleave Mill in 2012 by the Environment Agency and the Westcountry Rivers Trust.

Chris Walpole (The Book of Belstone and The Beacon 2000)

Belstone Parish Councillors, as the trustees of Skaigh Wood Trust, are also responsible for the management of Skaigh Wood, the area of enclosed woodland on the lower slopes of Cosdon above Sticklepath and the lower part of Belstone Cleave. Although it is on the South Tawton side of the River Taw, Skaigh Wood has actually been in the ownership of the village of Belstone since 1956 when, at  threat of being bought and developed as commercial coniferous forest, it was purchased with funds donated by village residents.

Though Skaigh Wood is not Common Land, the people of Belstone have free access throughout its area and other members of the public may of course use the registered footpaths (and one bridle path) which run through it. As with Belstone Common, land management policy is consultative – in this case with the DNPA.

Skaigh Wood can be divided into four areas:

1) The original area of semi-natural ancient woodland to the north and overlooking Sticklepath.

2) The area of younger woodland higher upstream from 1) which, originally forming part of the grounds of Skaigh House (across the river), formerly contained features including specimen conifers, a summer house and an ornamental pond. This last has recently been partially restored and lies immediately adjacent to the riverside path.

3) Skaigh Warren – the area of grassland and scrub lying above 2) which is subject to an agricultural tenancy.

4) Upper and Lower Ska – two former rough meadows lying uphill from 1). Upper Ska was planted with tree saplings in 2000 by local volunteers from Belstone and Sticklepath. In the case of Lower Ska the primary management objective has been natural woodland regeneration. It has also however been the subject of some very limited tree planting.

Public Rights of Way in Devon