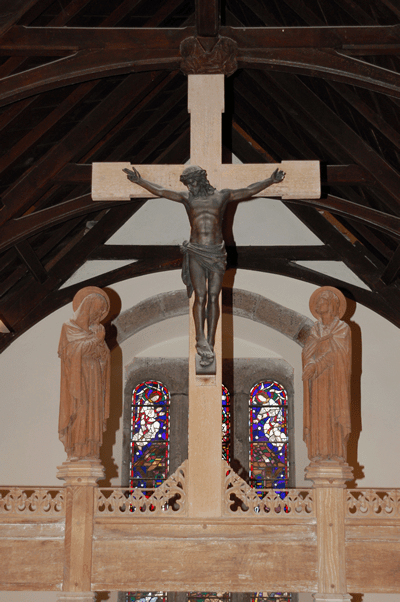 The early March snow in the Churchyard made a pretty picture. The easterly wind had caused the porch to fill with snow, so a pathway had to made for the stalwart congregation on both Sundays affected. Thanks to Michael Ash for his hard work keeping on top of the Churchyard.

Luckily on Mother’s Day the sun shone for our Service. This was taken by Alison Duckers, who produced paper tears for the sad moments in our lives and hearts on which we wrote our Mother’s names and offered them up for prayer. The interactive Service continued whereby a Mother and son from the congregation were given pen and paper and then asked to write answers to personal questions about her. Tom guessed his Mum’s favourite food and past-time, but as to her favourite colour, I think both were at a loss! There was a lot of laughter and great fun was had by all present. Thanks to Eddy and Sandra for making the posies, given out to all the ladies by little Alex Symes.

The five weekly Lent lunches are going splendidly. Each of the villagers take a turn at hosting the event, preparing delicious soup, bread, cheese and fruit. On average, a dozen people turn up to a different location to eat and discuss the miracles of Jesus.

The Cash for Khazi project continues to gather momentum.  Donations from the opening day of the refurbishments at Bernard’s Acre were kindly offered in aid of our appeal. However, due to Belstone being virtually cut off by the snow on March 18th, this event will most likely be rescheduled. Many thanks to Paul Sowden for his generosity. We had another visit from the architect who wanted to finalise details of the plans, so that aspect seems to be going well. The Okehampton Times wished to do an article on the project, which Simon wrote, and a photographer visited St Mary’s to take a picture of the church, although it would have been better without our mugshots. Sorry, Simon! This appeared on Page 3 of the paper on 15th March.

Mothering Sunday was marked with Morning Prayer and hymns, led by Paul and Isobel Jarrett from Sticklepath Community Church, with the lesson read by Jess Bowles. Flower posies were given to the ladies present. Though only a small congregation, mainly due to the very wet weather, it was a happy and enjoyable occasion.

The first Hot Topics discussion group, held at the Devonshire Inn, was attended by twelve people and almost as many attended the second session, some even travelling over from Okehampton!  The format is very informal, interactive and stimulating – helped along with a tasty hot pasty and pint. Our thanks to Rev. Steve Cook and Derek Moore for leading the sessions (which will be four in total) and to Ann V-J for providing the cosy venue.

Recent repair work to the church roof came just in time, prior to the snow and extreme wet weather. Thank you, Peter and team.

We wish you a very Happy Easter

The website editors are Edwina & Robin Hill, on behalf of Belstone Village Hall. They can be contacted at editor@belstonevillage.net.