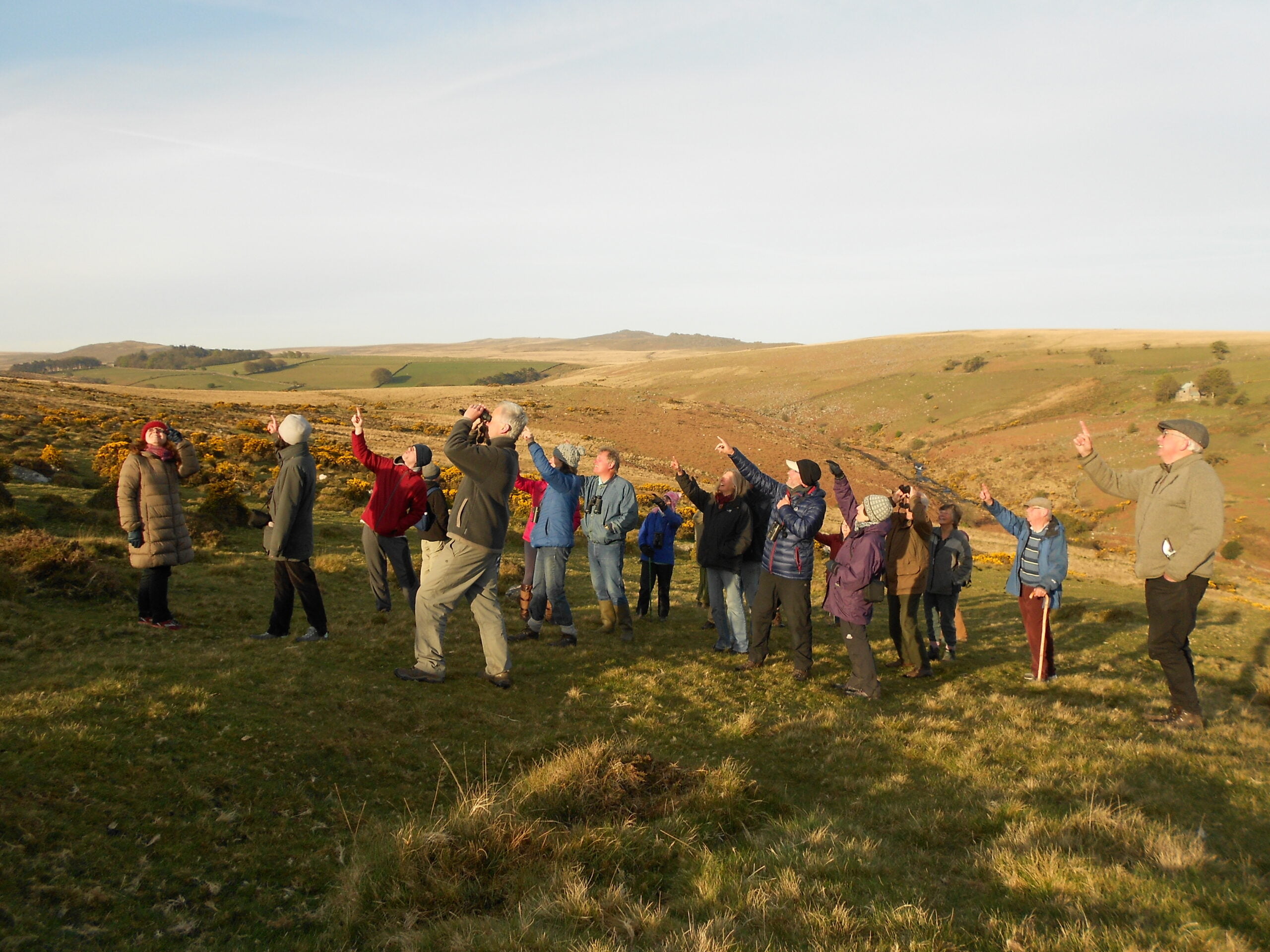 Some visitors to the Belstone village website may remember the short YouTube dawn chorus films I posted during the first lockdown in 2020. Indeed, birds and their songs were one of the things that sustained many of us during the various lockdowns of 2020 and 2021. This spring, as we all emerge to enjoy such delights together once again, the annual dawn chorus walk around the parish resumed on 30 April – a perfect morning weather-wise, calm and dry and, once the sun had got to work, warm.

I walked to the Village Hall at 4.50am, just as the first robins and blackbirds began to sing. By the time the 40-strong party set off at 5.30am, many other species had joined in. But before the ornithological soundscape began, we were treated to an astronomical rarity, for this was the perfect moment to observe Jupiter and Venus in very close proximity, at the same height above the horizon, low down in the eastern sky.

The walk followed a similar route to that taken on most of these outings since the late Mark Blacksell led the inaugural one in 2003 – Brenamoor Common, Priestacott Wood, Tor Down, West Cleave, Nine Maidens, Watchet Hill, Birchy Lake and back to the hall though Belstone village. In the wood we heard blackcaps aplenty, a loud nuthatch and had a good view of a song thrush in full flow on top of a tree. On the lane at Priestacott a swallow, the first of the year for most of us, flew past, house sparrows squawked and argued, jackdaws clucked and a pair of goldfinches hedge-hopped ahead of us. In years past the walk descended to Chapel Ford in the hope of seeing a dipper (we never did) but lately (as I’ve got older) we’ve stayed along the top of the cleave. This time, those with good eyesight spotted movement on the East Okement at the ford several hundred metres below, which turned out to be a grey wagtail.

At the Black House ruins as we listened to a willow warbler, someone at the front of the group heard a distant cuckoo on Scarey Tor. I took the opportunity to read some cuckoo folklore that appeared in a recent Moorlander article by Tracey Norman; the first call is said to bring great wealth, especially if those who hear it then turn the coins in their pockets … or it can bring good fortune providing you put a stone on your head and run as fast as you can until the stone falls off … or you can protect your home from fleas, rats, mice and unwelcome (human) visitors by digging up the earth beneath your right foot after hearing the first cuckoo and then sprinkling it on and around your doorstep … and hearing the first cuckoo with your right ear will bring luck in the year ahead, while hearing it with the left ear will bring bad luck. We moved on further towards Scarey Tor; before long everyone had heard the cuckoo away to our right (including official last-man of the party, Chris Bonnett) so we are all now hoping for good luck. It was still calling as we reached Nine Maidens stone circle but no-one felt inclined to lift one of those stones onto their head. On top of Watchet, as skylarks vanished upwards into the heavens or parachuted back to earth all around, the cuckoo gave us the benefit of a close flypast, hotly pursued by a small bird, probably a meadow pipit, which was no doubt hoping the cuckoo would not return to lay its eggs in the pipit’s nest.

Hopes of buzzard, raven, stonechat, green or greater spotted woodpecker or redstart came to nothing this year, but some of us finished the walk by spotting our first house martin as we came though the village. In all 32 species were seen and/or heard, about par for the walk. All that was left was to tuck into a revitalising breakfast of porridge with golden syrup, cereals, toast and bacon rolls organised by Sharon Cooper with Sasha Bonnett, Edwina Hill, Susan Norrish and Lucinda Walsh.

The website editors are Edwina & Robin Hill, on behalf of Belstone Village Hall. They can be contacted at editor@belstonevillage.net.