It was a dramatic afternoon in the skies over Belstone on 2 December.  Two Merlin Mk 3 helicopters from 846  Naval Air Squadron based at Yeovilton had been tasked by DNPA to airlift 14 bags, each containing about one tonne of aggregate, from Taw Marsh to the central part of Skaigh valley where the material will be used by StOC to stabilise and repair some of the boggy paths.  The aggregate did not originate from Taw Marsh, rather it had been bought by DNPA from ordinary suppliers, then transported to Taw Marsh by a contractor.

Each MoD supplied bag had to filled by hand, not by mechanical means, to ensure that no damage was done to the bags (and the bags can only be used once).  It was touch and go whether the airlift could take place as the weather was poor with mist, strong winds and driving rain. However, everyone was keen for it to happen as if this opportunity was lost the helicopters probably wouldn’t be available again until next May – this being the last day of these pilots’ training before joining their active units.

Three ground crew from Royal Marine Commando Mobile Air Operations Team prepared the bags (two bags roped together for each lift, so seven planned carries altogether) at Taw Marsh and fitted the strops as the helicopter hovered about 30 feet above the ground.  After much reconnaissance and several dummy runs to check the drop points and to assess the wind strength and direction, the lifts began.

DNPA ranger Ian Brooker spent the afternoon in the valley attempting to stop walkers coming into the potential danger zone, having previously cleared some of the undergrowth in several different places. Three more ground crew manned the drop zone. After four carries the helicopters returned to Okehampton Camp for refuelling. As the weather deteriorated further the fifth drop was aborted at the last minute as gusts of wind and driving rain caused the bags, on the end of about 20 metres of rope, to swing wildly across the valley. The Merlin headed back to Taw Marsh but then returned to try again, successfully.

Ground crew cannot directly grab the bags as they descend as a build up of static could prove fatal. Instead they use poles to earth the bags first. The severe downdraft from a Merlin must also be guarded against  (search ‘Merlin portaloo’ for the YouTube footage of what happened at Okehampton Camp before the Ten Tors event in 2016) and I had to stand over 100 metres away when taking photos. Eventually gathering darkness prevented the final load from being lifted, but about 13 tonnes is now in place awaiting StOC to spread it. 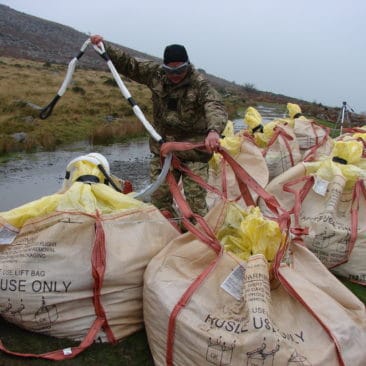 We have ‘lift off’ 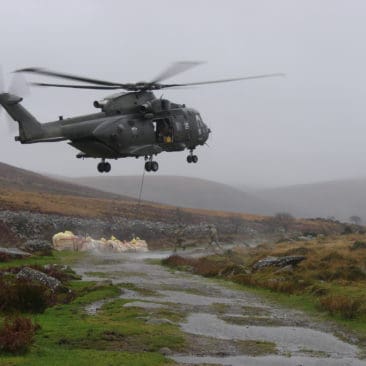 Hovering over the Skaigh Valley

Getting near the ‘drop zone’

Elsewhere on the Site …